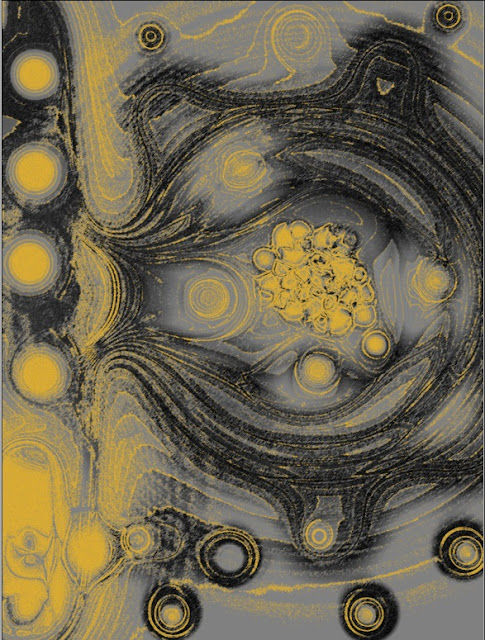 - ON BADIOU -
Truth, Revolution, Decision
____________________________________
Beautiful post by Levi, and of course I agree. Even though I have finally parted ways with Badiou on philosophical grounds, he must be acknowledged as one of the greats, if anything, in virtue of having delivered philosophy back to itself. Without remorse, without lamentations. And although, as he himself emphasizes, Deleuze and Lacan were already weary of the exacerbation of critique that became hegemonic after Heidegger in Continental theory, Badiou did the most explicit work to reactivate truth by bluntly invoking the rights to philosophy. For even Deleuze had to frame his struggle in much the same way as the great phenomenologists and vitalists: a struggle against the horizon that philosophy had set for itself. And of course the result is such a radical reworking of the fundamental problems that a lot of the traditional terminology drops out, as it were.

But with Badiou we have something quite different: a true neo-classical philosopher. He brings back not just philosophy, but the dialectic, the great system, the old Platonic complicity between the formal and being, etc. And he does this in crystalline style, which has also worked to supersede what had, as Levi often rightly emphasizes, become a lofty vanity in obscurantist prose. For even Deleuze, as well as Derrida, Lyotard and Lacan, for all their brilliant interventions, were impenetrable writers. I don't think they were bad writers, as much as they were ego-maniacal. Maybe the psychoanalysts can make the correct diagnosis! As I mentioned in my last post, the stylistic gesture of self-aggrandizing is of a piece with the philosophical question of how they take themselves to be splitting the field into two. And indeed, although Badiou preserves the prophetic, priestly tone that his predecessors did, he does so with a degree of clarity that French intellectuals did not tolerate. Perhaps this is the great reason why Badiou actually became popular in the U.S and not so much in France at first! And it's also no surprise that people like Stiegler are much better received there.
Yet the single most important thing to note is precisely what Levi underlines. Badiou brought back something into philosophy that had, from the beginning, been the condition of its separation from sophistry: namely the preoccupation with truth. The passion for universality, the depth of the matheme, and the suspicion against the cult of experience. As Lacan already knew, something was preserved in the transparency of the matheme that resisted its appropiation into bare ideology; the matheme is closest to the real insofar as it 'sheds off' its semantic envelopment every time, in order to stratify itself ever anew.
The sad consequence is that a lot of people have used Badiou as a platform for a very fashionable, inane pseudo-Marxism, which is often composed of the same people that enlisted in the ranks of deconstructive apathy. Being a 'leftist' has become a trendy moniker for hipsters and graduate students to play revolutionary under extremely elitist circumstances. You have these pseudo-leftists go brag about Marx and then hit the pubs for their weekly dose of booze and Deerhunter.
This is not at all a new phenomenon: it is a variant of the 60's hippie, New age liberal motif. But in its current 'commie' version, I think it borrows more from what has been happening in South America for the past decade or so. Coming from Peru, I can speak for the ubiquity of the phenomenon: amassing  indie-group "leftists" vituperating against the State and its morbid excesses. From the very beginning I noticed something profoundly obscurantist in this gesture, and actually thought that Badiou's typology of subjective types allowed us to diagnose this. Upon analysis, it became clear that this gesture often proceeded according to the formalism of the obscure subject: it presented its own convenient sophistic slogans to tacitly avoid real intervention. The whole theme about how 'resistance is surrender', diagnosed by Zizek, was in place here.

And although I applaud the recent Occupy movements, and believe activism should be approached without cynicism, it must also be held to the highest critical standards not to let itself dissolve into mere sophistry. And that is effectively what is in danger of happening to the Badiouean terms, much like 'deconstruction' became deflated to the point where a silly chef could lay claims to 'deconstructing' a hamburger by replacing bread with lettuce leaves, or whatever else. I think this is a phenomenon that Badiou himself might have diagnosed apropos mathematics; how every breakthrough in the field becomes subsequently re-enveloped by ideology, forcing itself to break through with new creations again and again. The problem is that today it seems like the capacity of ideological re-appropriation within capitalism has become so powerful that it barely lets thought formulate itself before it exhausts its emancipatory potential, assimilated by the culture industry.

This is the truly terrifying dimension of capital that I think, perhaps, only Nick Land has been able to appreciate to its fullest consequence. Ultimately, and risking accusations of reactive fatalism, I think that Badiou's apology of the revolutionary spirit will, unfortunately, be seen retroactively as something of a glorious obituary for the spirit of the militant, and the powers of subjective intervention. Yes, the revolutions in the East and South America matter, and remain vibrant. Yes, things can happen, decisions matter. But let us not let these gestures distract us from what is, after all, a still-engrossing empowerment of global capital.
Perhaps this prophetic dimension sheds light as to why at the extreme of this dialectics of 'rupture' and subjective intervention lies also something of a Kierkegaardian religiosity, a Christian variant of the Heideggerean/Hoelderlinean call for the Gods: Meillassoux's reification of hope as the utmost political category, before the prospect of the coming virtual God after an advent ex nihilo. The short-circuit of a contingency so powerful it overturns even the rights of decision reserved for the event. Yet in these obsessions over decision, and escaping the law, one detects finally something of a terrible weakness. The grip of reasons once again dissolves into the vainglorious celebration of the powers of the will, and the romanticism once again overtakes the painstaking rational kernel of the dialectic. And there is, indeed, something almost saintly about this extremity of the dialectic proposed by Badiou. The sacrosanctness of reason delivers us, in the end, to the pure power of decision, in the hopes, perhaps vain, that humanity might reserve itself the power to interrupt that which has taken hold of it with unprecedented strength.
Publicado por Daniel Sacilotto en 17:02