Wolfendale and Object Oriented Philosophy: Some Remarks and Questions

Following up on some of Pete’s excellent commentary on OOP over at deontologistics, some further issues may be raised about the status of withdrawal in both Graham and Levi’s respective accounts. Pete raises doubts about whether OOP has provided justification for the thesis that ordinary knowledge is finite and inadequate, i.e. in order to advance the thesis that real objects are always in excess of our knowledge of them (which Pete calls the excess principle of withdrawal; the other one being independence: that things exist independent of their relations). The worry arises for Harman’s account in particular, since it is supposed to be the phenomenological ground for the purchase of intentionality extended to all objects. If phenomenologically grounded withdrawal cannot be established, then it becomes less clear how Harman can make good of the epistemological claim that access to things themselves is impossible.
Pete argues that at this juncture Harman brings in unjustified ontological assumptions, which can ultimately vitiate his own position. Interestingly enough, Pete centers his argument in a single assumption, an assumption which he claims may also be used to undermine Meillassoux’s own 'hijacking' of the correlationist argument. For this, Pete claims that what is common to both speculative realism and Harman's OOP is a certain way of understanding what it is for something to be in-itself, and in order to map this common understanding he distinguishes between two possible senses of what in-itselfness could be taken to mean:
Mind Independence: Something is in-itself is if can exist independently of the existence of ‘minds’.
Attitude Independence: Something is in-itself if the way it is is independent of the way we take it to be.
Pete writes:
“I’d suggest that Meillassoux and Graham adopt the former, more traditional way of understanding in-itselfness, although in Graham’s case it modifies to the claim that something is in-itself if it can exist independently of its relations to other entities (insofar as all entities effectively play the role of ‘minds’). The important point is that the former is an ontological way of conceiving in-itselfness, whereas the latter is purely epistemological (insofar as it says nothing about existence).”
The central claim here is that adopting Mind Independence leads both into an ontological grounding of epistemology, and to correlationism finally. But he has certainly not established that both theses are necessarily incompatible with each other, nor shown where Meillassoux or Harman would clearly stand with respect to both theses: he merely asserts they both endorse mind independence.


Now, Meillassoux certainly adopts Mind Independence, insofar as not only the in-itself can exist in the radical contingency of all beings, but since a contingent entity must exist. Pete then claims that in establishing the general contingency of all there is Meillassoux must deny that any knowledge of particular entities is possible. He writes:
"In each case, the fact that we cannot know anything about particular entities functions as an important premise in an argument that establishes something about entities in general. What thus unites speculative realism and OOP is that they hold that all knowledge about particular entities is relative/uncertain/impossible, but that we can thus know something absolutely about the structure of entities as such, namely, the ontological fact which underlies this relativity/uncertainty/impossibility."
But this seems a bit baffling, although I could be wrong in my reading here: Meillassoux does not think it is the absence of any knowledge about particulars which entails knowledge about them in general, it is the knowledge that every particular could not exist that grounds the absoluteness of facticity and solicits its extension to all beings. This he does by saying that any attempt to relativize the absoluteness of contingency invariably results in its re-absolutization at a higher level. Certainly, this entails no entity or quality can be said to be necessary, and therefore such knowledge is disavowed. But it by no means entails that nothing can be known of particular entities; on the contrary, it simply annihilates the gap between the thinkability of an absolute and thought so as to facilitate the purchase of being by thought. Once absolute contingency is deemed thinkable and necessary, nothing prevents from deriving knowledge which would shed light about particular entities or their qualities, so long as they don’t imply their necessity, i.e. the violation of absolute contingency.

In other words, Meillassoux would most certainly reject the Attitude Independence thesis, insofar as there is no necessary epistemological gap between how we take entities to be and the way they are; i.e. we can take the in-itself to be as radically contingent, but immanently thinkable. The problem for Meillassoux becomes rather to elucidate the structure of this coincidence of world and word, being and thought, since it is left provisionally as an unexplained legibility based on the congruence between the formal inferential rules of logic and mathematics, and the structure of thought itself. This congruence between thought and thing, objective structure and conditions of thought, follows from what appears to be underwritten by the Badiouan endorsement of the Parmenidean thesis that being and thought are the same. The problem for Meillassoux thus pertains to the essential obscurity of the relation between inferential logico-mathematical discourse and thought, a clearly ontological relation which is apparently anchored in Badiou’s own mathematical Platonism, which is itself articulated around the dissolution of the form/content distinction (See The Concept of Model) and the thesis that mathematics is ontology.
Although Meillassoux admittedly restricts the ontological scope of mathematical discursivity, it should be noted nevertheless that, like Pete surmises, this remains unexplained in his preliminary account of correlationism in After Finitude. (Pg. 103). Whatever else Meillassoux specifically anchors on set-theoretical strictures (and in particular the Zermelo-Fraenkel axiomatic Badiou draws upon), it is clear these underlying ontological commitments also underlie his epistemological positions: for example, in appealing to Cantor’s theorem to advance the non-thinkability (and impossibility) of totalizable being. Since the latter is critical for Meillassoux’s arguments against the possibility of applying probabilistic reasoning to the universe as a whole, in his way to assert the ontological contingence of the laws of nature, Pete does well to take notice on these shortcomings.
On the other hand, Graham would apparently endorse both positions. Like Pete states, it is clear he defends the Mind Independent existence of the in-itself from thought, insofar as the object withdraws from all relations, and so the real object/qualities remain forever withdrawn from their sensual doubles. But he would also, I take it, defend the Attitude Independence thesis, since the way any object appears to me, or to any other object, is in sensual (intentional) form, and these phenomena are absolutely separated from real objects and qualities.

On Levi and Withdrawal
Here I’d like to fast forward to Pete’s series of posts answering Levi and presenting his many qualms with the latter's version of OOP. One of the main targets of Pete’s critique pertains to the status of how ‘translation’ operates in Levi’s account, in order to advance the excess thesis; which as we stated above, claims that objects exceed knowledge of them. In Levi’s particular account, this comes down to the claim that communication between distinct systems is necessarily destined to fail, since every actual manifestation or 'perturbation' which occasions a change in another system involves a process of translation which necessarily depends on system-specific features (its ‘virtual structure’ in Levi’s own Deleuzean words).

Although Levi’s precise adoption of the Deleuzean frame has not been made excessively clear (indeed, I am hoping Democracy of Objects will deliver on this account), we can stipulate that this entails that a) every object has a unique virtual structure or ‘proper being’, and b) translation invariably ‘involves’ the whole of the object’s virtual structure, The reason why both (a) and (b) are necessary is that if two identical systems exist then direct communication appears possible, insofar as the information transmitted between two systems could result in identical information, and nothing prevents us from saying transmission has taken place without loss or excess. But if direct communication is possible on occasion, withdrawal is threatened wholesale. 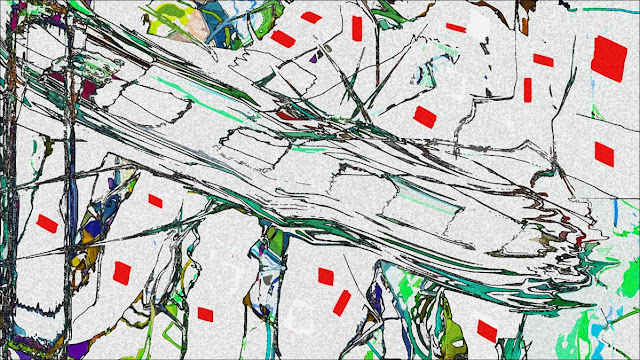