The Pure and Empty Form of Love - On Inertia 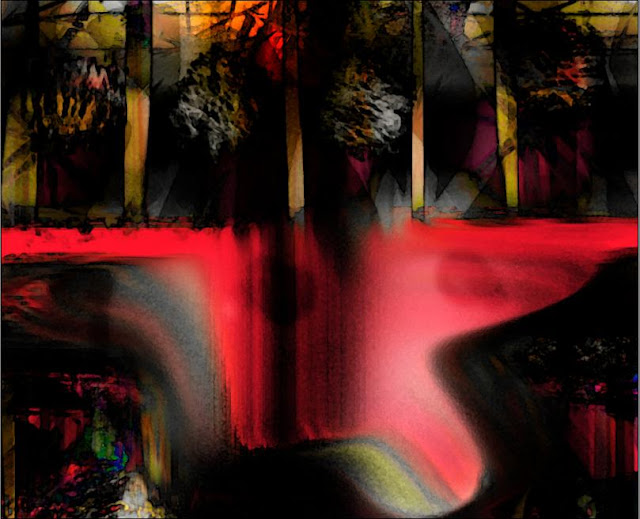 I wonder if all the time spent reading books and agonizing over how to perfect my technique to write clearly and lucidly, without pretence or aloofness, has paid off. When I reread the pages from my younger years I feel an invading sense of pride, as if I had been then somehow in touch with something deeper, more substantial, than the petty excavations into the fabric of "metaphysics"  or whatever else has come to adumbrate my pallid hours. If anything, those hours drag on, with a feeling of dread, if not burdensome boredom, as if the ceaseless rambling over every minute nomological contraption that emerged at the hands of some bearded aristocrat sufficed to entice me away from the fleshier pleasures incarnated in the inane words I here produce. But such is the seriousness of adulthood; one which I've abhorred and delayed to the point where its deferring has resulted in, perhaps, its inevitable banishment. I remain a child, encapsulated in my trite quibbles about nothing except my own deep sense of dissatisfaction with anything orbiting my self-absorption.

I always begin these ever-more infrequent lapses of writing with the necessity to purge whatever keeps me from writing at the time. There's inevitable rust when one sporadically attempts to return to writing after being confined to reading, or any other activity besides. Strangely enough, now that the pages I've read have multiplied beyond any reasonable calculation, and in spite of the fact that I'm older and (should be) wiser, I perceive no superiority to my writings now than in those early attempts. My vocabulary is dimmer, my imagination drier, and my tone  unmistakably less confident. Perhaps this will serve some pragmatic purpose in the future: perhaps my lack of confidence will translate into a more useful channeling of my cognitive powers to some public medium, not restricted to the useless prattle that does well to remain within the confines of adolescent drama. But nevertheless, I feel ill-equipped to assume such a task; to relinquish my egotism and deliver myself into an all-too publicized egalitarian cause, as my recent leftist-ramblings purport to announce, seems ridiculous, even to myself, deep down. I can't foresee myself at becoming anything but a confessor of inanity. I don't care for books as much as I would like to; I can't relate to them as directly or empathize with their contents. They don't quite fit. There's something missing there; something unquestionably less fascinating than to idly sit and contemplate in armchair manner, and without concern for those starving in the cold, the spectacular parade which waltzes before my thought; its wicked imagery, its pitiless capacity to conjure the most viscerally upsetting forms and successions, its irreproducibility in act, which in some way tracks down a delightful voyeuristic quality to anything that ought to remain but purely immaterial catharsis.

I feel charged, filled up with angst and dread, and want to unleash some eardrum-shattering shriek onto the world. I'm fucking fed up with this ever elongating routine of misery, its monotonous stupidity which only delivers me to the promise of being the perpetual critic; casting anew my dissatisfaction through the mechanical repetition of the same gestures that have become utterly impervious to unruliness. But of course I've learnt that to remain encapsulated in such self-perception of unruliness is in truth a mere procreation of the most mechanical and isolated of realities: the expressive paradigm which knows of no creativity or production. At best, it indulges on the dull clichés of the epoch; at worst, it simply contents itself to destroy whatever is being fought for, as the bitter shadow of him who in lack of a foreseeable road sees no better option than to preach the universal pinching of all tires, so as to advance the thought of the only world possible: that of inertia. Those contributing to the world of inertia, woven by dream-crippled bitterness and resentment, would rather be elated to witness the entirety of existence come to a halt and break down into uniform, pathetic motionlessness than to face the contrasting evidence of a realized spirit; of a mobile collective, of a single lively attempt to amend things through a fair dose of work or action. What's amazing is that deep seated belief in Inertia will confabulate enormous work, incrusted in thought obviously, to stop things from being set in motion. This is not so much philosophy, since it doesn't concern the love for knowledge, but mere 'praxisphobia': hate for whatever moves or wishes to move, for all dynamic becoming, for all life, for all the stupid birds and hatching eggs, for the wave-riding surfboarders swirled by the tides and their even dumber resilient repetition; contempt for all that keeps a promise, waging against every feeble sketch for something to be built, against every project or axiom, shattering anything that might allow one to fling before all eyes the gold sprinkled medal of self-earned realization; the beauty of unrest.

Love for inertia is not a fidelity or love for thought, but is borne out from an utter distrust for any love whatsoever; incarnating disappointment so that one becomes nothing but the pure form of love itself, consummated in anonymous anxiety, dwelling without an object or fantasy, but consumed in the negation of all particularity, severing all ties with the worldly so as to assume the wholesale paralysis of the world as such. For I'd sit here forever, trying to devise ever more seductive phrases and metaphors to lure those with a taste for the facile and the slothful, for the love of plain, dried-up weakness. To indulge in weakness requires, doubtlessly, one to become ever more adroit at setting all aspirations to rest, at hijacking every positivity from its glittering charm. That's why the cynic before you cannot content himself with mere post-modern ramblings against "totalitarian injustice" in favor of democratic parades, nor even the neo-Marxist celebration of universalism against obscurantist sects.

No, I offer no promise of egalitarian salvation, no rain for the fields I cast salt upon. I merely use my cognitive magnetism to paralyze that which, being set in motion, can only jeopardize my own disdain for motion. To expand the force of magnetism as pure negativity, not in Hegelian fashion, but dissenting with the totality of beings traversing the air. Only then one renounces all hope to find hope within the vibrant world, and sets off in the delightful crusade of accelerating its morbid decay.

To pinch balloons as a form of living.
Publicado por Daniel Sacilotto en 2:06