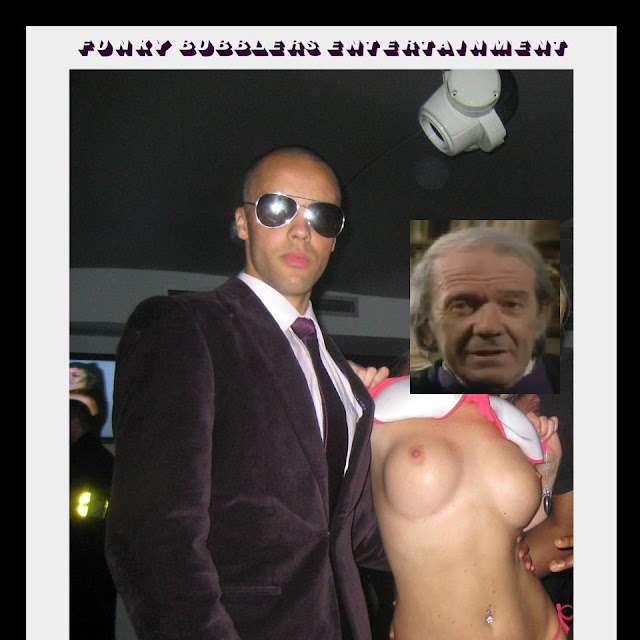 It has been a while since I have written anything here, but I'm happy to report this has been for a good reason. I have been mostly occupied writing a monograph-piece that is now clocking at around 86k words. I will post some information on this ongoing project shortly, but I wanted to use this opportunity to talk about something else. Something real funky. A stinker in fact.

About a year ago I was contacted by the likes of a certain fellow by the name of Jason Wakefield whom I knew nothing about. He contacted me first through facebook, and upon seeing that he was friends with many in my philosophy-circles, I accepted his friend request. Why not? Shortly after, I would find out that Mr.Wakefield ran the cross-disciplinary journal 'Avello', which in turn was the offspring of some publishing agency by that same name. Needless to say, at the time all of this was unbeknownst to me. I was surprised to see many respectable folk listed in the editorial board, however, including Adrian Johnston and Catherine Malabou. And the journal claimed to be affiliated with Cambridge University.

More surprising still, Mr.Wakefield's facebook profile revealed that he was also related to a strange organization that went by the name of 'Funky Bubblers Entertainment'. And just by judging from the photos, boy, did it look entertaining alright. Boats, champagne, electronic music, and overt womanizing. Mr. Wakefield, hereby The Funky One, sure knows how to party, and unabashedly professes a love for beautiful women. He even thanks Pamela Anderson in his last monograph. But we'll get back to that.

As if all of this wasn't enough gold, I soon came to learn that The Funky One went also by the name of DJ Luga, and was responsible for some musical concoctions whose qualities I'm in no position to comment on. I will say that he got me hooked on Rihanna's Closer, for what it's worth:

Here the ordeal turns sour, however.

After having no interactions that I can remember, I was approached by The Funky One through Facebook, July of last year (2012). He cordially invited me to participate in the upcoming issue of his journal, which was about to take off, including contributions by some of the distinguished folk I cited above.

Dear Jason,
Here are some candidate papers. They are all long, and fairly technical. They are not formatted for publication yet, so do let me know if any one of these fits your expectations so I can go ahead and make the appropriate edition.

The attachments included four papers of mine, including the Lacan piece that I mentioned above. In short notice, The Funky One requested that I send him a bibliography for that paper, and said it would go through an editorial board peer-review process, as expected. I agreed, only to receive, barely a week later, an e-mail detailing which revisions to make. So, everything in being in order, I proceeded to work on editing the paper in question during the ensuing weeks, preparing it for publication.

And then it happened. All of a sudden, on September 7th, I was tagged on a facebook thread made by The Funky One himself, announcing the online publication of Avello's latest issue. Slightly perplexed, I went to see if they just went ahead and published the Lacan essay without the due revision I had been working on, and in spite of rejoinders sent to me. But no. None of that, folks. Instead I saw another paper of mine listed and uploaded there, a paper which I had sent originally but not edited for him, nor authorized him to publish in the form it was.

I immediately contacted Wakefield to express my perplexity, to which he responded by claiming that a 'misunderstanding' had taken place. After talking a bit with Paul Ennis, and consulting with Jodi Dean over facebook, I became increasingly suspicious of The Funky One's antics.

Still, I decided to let the whole matter slide, since I had no real problem with that paper being disseminated, even if I would have not authorized its publication had I been consulted. Instead, I simply decided to avoid further professional contact with The Funky One, and limited myself to giggling over the many-a-thousand wondrous funky bubbles that popped in his facebook wall: endless praises for Cambridge University, shameless self-publicity of all sorts for his 'work' and his journal, automated responses to every query raised to him, and lots of happy times partying.

With all this in mind, and having more serious matters to attend to, I would have been merry just to forget about The Funky One's unethical slide. Times of peace were upon us. But when I thought I was out, they pulled me back in.

A few months later, towards the end of the year 2012, I was startled to hear yet another issue of the journal announced and, shortly after, published. This time, alas, I was not invited to participate. Boo-hoo, right?

Little did I know, I was invited all along; an invitation I couldn't really refuse. For I was fortunate enough to catch my name evoked by Mr.Wakefield, publicizing an essay of mine, in the wall of my friend Nick Srnicek. To add to my confusion, the title of the paper attributed to me was totally unrecognizable: "Badiou and Brassier: Conditions with Problems?"


If things aren't superlatively clear, allow to be more blunt. The Funky One just went ahead and published another of the drafts I originally sent him, without consulting me whatsoever. Needless to say, at no point did I authorize the publication of that piece, let alone for the title to be changed to whatever he thought might serve to lure an impressionable demographic.  Nor would have I allowed for the publication to take place had I been asked at that point; not in Avello nor anywhere else for that matter. The piece in question was no longer representative of my thinking at the time, nor was it in publishable form.

Let me make this absolutely clear: I did not authorize the publication of that piece, nor was I consulted about it.

So, I immediately responded to the thread where I had been tagged, instructing Jason to take the piece down, and warning him that I would press charges were he to use my work from then on without my consent. Predictably, I got another automated message from him, claiming for yet another 'misunderstanding'. To this day, the essay has not been taken down.

But it never ends with The Funky One, sadly. He just published his first "book", under the very Avello Publishing Press he proudly proclaims himself CEO, of course. He even sells it through Amazon, and plagues everyone's walls with robotic prescriptions to buy it:


Now, I am fairly congenial to cross-disciplinary exchanges, and actively encourage the mating of different forms of thought. I can even get behind the wild partying gig; we could sure use some funk and bubbles, and less boring soirees, methinks. There is a place for a Funky Bubbler among us, even if, alas, it seems that the funk has indeed taken him a bit too far at times:

I have no comments on The Funky One's less successful ventures.


It is simply incomprehensible to me that thinking of this caliber could pass for 'philosophy':

"Hamlet is central to Deleuze's philosophical project in Difference & Repetition because of this universal question of Being.9This ontological questioning is shared by Alain Badiou in a very different way in his Being and Event.10 Badiou thinks about non-being in a more mathematical way than Deleuze. Meillassoux's use of Cantor's mathematics is a clear influence of Badiou's teaching. Indeed Badiou wrote the preface for After Finitude: An Essay on the Necessity of Contingency. Heidegger's central preoccupation with being and non-being, was to answer the question of what is is, as is is part of the verb to be, which in turn is obviously the verb of being. This is the crux of Hamlet's question 'to be, or not to be?' Two contrasting sets of metaphors structure this particular soliloquy. Being impedes and hampers life as an actively hostile mortal coil, whilst non-being through death is a consummation of this struggle through a reiterated sleep. Hamlet uses the pronouns 'we' and 'us' later in this soliloquy, alongside the utilisation of the impersonal infinitive, which opens up the question of being to us all as a universal question. For some analytical thinkers, Heidegger's answer to Hamlet, may seem like a pointless querying of an absolute presupposition, but for Badiou, perhaps being and non-being can only be re-investigated through Heidegger's ontology."

I mean, this spiel makes Latour litanies look like a groceries list. It's as if Meillassoux's factiality suddenly obtained, producing an inexplicable amalgam of senseless blather, a seemingly unruly tirade only cogent under the hypothesis of a chaosmos. This is the philosopher's version of The Room folk.

Anyway, to wrap up, those of you being contacted by The Funky One are thus advised not to fall to his trap. The guy is a conman; a hilarious one, to be sure, but a conman nevertheless. To this day I have not been able to exactly figure out what's his affiliation with Cambridge University, nor whether he in fact holds a philosophy doctorate, as he claims. Even less have I been able to figure out if indeed Johnston, Malabou, or any of the other professors allegedly in his editorial board are even aware of this guy's existence, let alone whether they participate in this charade.

Now he's pervasively publicizing the forthcoming Avello Conference; and I would just encourage those of you in his periphery to avoid it like the plague. Or maybe just go and see what the Hell is going on with this guy? I'd be weary about getting the sour end of the funky bubbles and ending with some brain damage.

But, in the end, it is his philosophy that is ethically irrefutable, not the man, nor his doings.

Ιt's nearly impossible to find experienced people for this topic, but you sound like you know what you'rе talking аbout!

Very nice post. I just stumbled upon your weblog
and wished to say that I've really enjoyed surfing around your blog posts. In any case I will be subscribing to your feed and I hope you write again very soon!

I blog quite often and I really thank you for your information.
Your article has truly peaked my interest. I'm going to book mark your blog and keep checking for new information about once a week. I subscribed to your Feed as well.

[url=http://www.vip1michaelkorsoutlet.org]Michael Kors Outlet[/url] A beautiful thing to see, right? She finds a pair she likes and says to her husband "I want these shoes!" Her husband replies "Do you need them?" She says "No, but they will go great with my pink dress that I bought six months ago and have never worn because I have never had just the perfect shoes to go with it

[url=http://www.mislouboutinsaleuk.co.uk]Christian Louboutin Sale[/url]Simply mention the words "shoe shopping" in a group of women, stand back and watch the excitement

[url=http://www.vipnikenewzealand.info]Nike NZ[/url] Gifts for her may include beautiful, warm blankets as well

[url=http://www.upnikepascherfr.info]Nike Dunk[/url] So you would be able to savor buying different shoes at a cheap price that you would have never dreamt of before

Greating give information for you, thanks to give up. It's excenlant post. Itupoker.Com Agen Poker Online Indonesia Terpercaya