The Positive Side: Amends With OOO 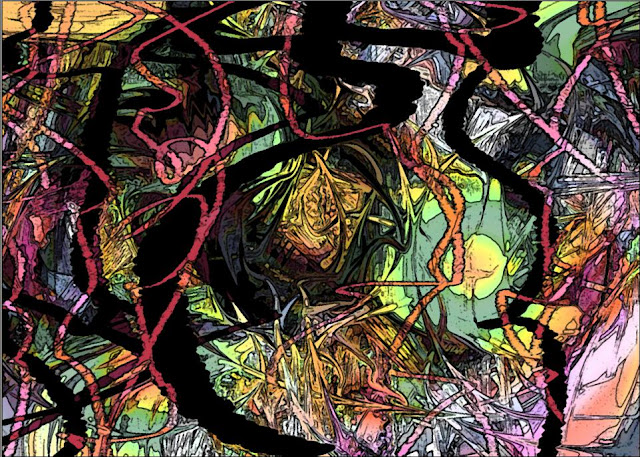 - The Positive Side -
Amends with Object Oriented Ontology
____________________________________
I am compelled to answer Graham Harman’s reply to my post about some of the problems I perceived in his version of OOO, given my doubtlessly incomplete and probably defective understanding of it. As some of the ensuing discussions with Levi, Joseph and others have encouraged, there is much more to be learnt from Graham’s wonderful work than I have been able to capture thus far. So, I should first say that I owe Graham an apology for being exceedingly critical, and not being as vocal about the aspects I find commendable in OOO; especially for not taking into consideration arguments in support of the claims I purported were either without justification, or bearing a defective one.
By way of mitigation, I can only say that I never intended to project a caricature of Graham’s philosophy, but merely express my quibbles as I understood the arguments. Unfortunately, he expresses that I ended up misconstruing his position and obviating essential parts of his argument. For this there is no excuse. I can only say that I will attempt to do better in the future, and try to pick up on crucial missing details in my future readings. Also, I must confess that even if Graham was indeed kind enough to share with me some of his manuscripts in advance, I was only able to review these briefly, and I felt  that implying that I had possession of these in the commentary might have been improper for obvious reasons. But this is no excuse, since I  knew and did acknowledge for example that Graham’s Quadruple Object presents a series of diagrams illustrating his ontology, in much richer and thorough fashion than I did in my post. As a student, I am still occasionally imprecise in my adjectives, because of a lack of intellectual maturity which allows for precision. Part of why youngsters are polemic and energetic is because they are uncivilized still. I hope Graham doesn't forget that he is dealing with a first year graduate student, who has a long, long way to go before he can even hope to stand in the same position he is! I say this not necessarily with respect to knowledge about philosophy or skill, but also personal wisdom. I have a bad reputation for being a bit improper sometimes when I simply intend to be inquisitive, but I can see retrospectively why Graham got this impression.

So for all of these misgivings, I reiterate to Graham my apologies, and want now to rise up to the very pleasing invitation to formulate some of the aspects of OOO that I find most commendable. It is difficult for me, however, to state points of agreement between OOO and my own position because, alas, I do not really have one. Graham infers I have a love for Badiou’s work, which is very true, but I wouldn’t straightforwardly call myself a Badiouean at this point. There are aspects of the scientific realist guild of SR which I find very appealing (Brassier's work is notably influential on me), a lot of Deleuze is reverberating within me, and I find a lot in psychoanalysis and Zizek’s forays. This is where I see myself most comfortable, but at this point I would just really be modest and say I am learning and working towards a position. It might be constructive to try and formulate an own position, instead of perpetually debunking, but I feel I need a better grasp of things in the tradition before I do this. And clearly, if my understanding of Graham was so apalling, chances are I must be doing equally as bad in other terrains. Somewhere in-between this bundle of opinions, eventually, I hope, I might be able to say Iwith what I agree and not just what I like find inspiring.
Formulating discrepancies and signaling gaps has become for me a didactic tool to force me to formulate and disentangle my muddled intuitions, and has helped me a lot in progressively gaining clarity on the issues I entertain. After all, as a student, I am more than likely going to be wrong about plenty of things when commenting before I get them right. The beauty of the blog is that it allows you to formulate a preliminary understanding without getting too serious about it. In this case, it seems my reading was faulty for reasons I need to assess with further study. I don’t mean to have arrived at this result in bad spirit, even if I should have been more attentive to detail, particularly when it was expressly made available to me! I can only imagine how frustrating it must be to see the details of your work passed over in favor of facile dismissals, so I must take future precautions to be more empathic and rigorous.
That being said, I enumerate those features of Graham’s philosophy (and not just his ontology), which I find most inspiring, as well as OOO more generally:
1)      The insistence on the importance of vividness in philosophy, and highlighting its historical link to an imaginative, architectonic ambition, which furnishes for us novel ways of thinking and approaching the world in its complexity. This image of philosophy is what I most enjoy about the vibrant style and passion in OOO, and something which I also find stimulating in peculir ways in thinkers such as Deleuze (for whom importance is greater than Truth).
2)      I find the idea of a realism compatible with the withdrawal of real objects very interesting; insofar as it attempts to render compatible a full blown thought about the external world, and at the same time acknowledge that our knowledge/activity is partial and distorting. This is something which I think moderates realism in philosophy from becoming entirely insensitive to the very important lessons of critical philosophy, which often show us how painfully inadequate even our most cherished emblems of knowledge can be, inviting sobering modesty with respect how we view our thinking and footing in this world.
3)      Its seemingly boundless curiosity to explore different fields of discourse as a sine qua non for philosophy, de-localizing it from its restriction to the human cohort, but also from the strict philosophical text. Thus Graham embraces insights from Latour, McLuhan, just as Ian thinks robustly about video games, Levi about Lacanian psychoanalysis, and Tim Morton about Ecology. These are not fields external to philosophical interest, but all of the OOO members are willing to step outside the usual stock of heroes of the philosophical canon, and bring in fresh new air to the mix. This is again something which I think Levi would agree has prefigured some great advances in philosophy: Heidegger’s odd appropriation of Don Scotus, Deleuze’s bizarre stock of forgotten 18th Century philosophers (Wronski anyone?). OOO repeats this gesture, expanding the contours of the field in which it plays, without losing grip on the philosophical benchmarks of our recent times. Thus Graham’s appeals to thinkers like Zubiri, his intrigue for the occasionalist tradition, Aristotle, Lingis, Latour and others, supplements his absorption of aspects of thinkers like Heidegger, Husserl, and Levinas.
4)      Not to fear transforming an author, hijacking his thought from himself. This is a great philosophical move, from Aristotle's violence to Plato, onwards. Just like Meillassoux hijacks correlationist philosophy and exacerbates facticity to unearth an unforeseen realm of possibilities for philosophical thought, Graham attempts to not simply surrender a pious reverence for Heidegger (like so many of his ‘followers’) and takes a turn at the point where his philosophy does not merely give us an Idea to defend, but a crossroad to explore. The idea of the withdrawal of being is appropriated in Graham’s own idea of a withdrawal of objects. This articulates a philosophical problem presumably exhausted in a novel way, allowing us to see anew a face which had become worn out by predictable interpretations. Thus resists the sterile academicism that resembles the zombie-esque following of a sect (believe me, I grew up in , where phenomenology dominates the philosophical scene).

Thus Harman, as well as the other OOO folk, are not principally interested in getting absorbed into a downward spiral of academic technical debates to prattle exclusively among specialists. This passion for philosophy to be accessible and open, and not secluded and esoteric, is a commendable passion which many great philosophers were right to uphold (James, Dewey, Heidegger, Deleuze, Lingis, Zizek, DeLanda…).Although I think there are indeed many theoretical problems with Graham’s thesis of withdrawal, those certainly don’t make it less interesting or worthy of thought.

And yet although I must not shy away from saying that the preoccupations I expressed back then still remain now, at this stage, I can say that I acknowledge the necessity to go ahead and review Graham’s work to see where those missing arguments lay, and how they might assuage my concerns. I can’t say they do, but at the very least, right now, I can’t say they don’t. And that means that in saying there were no further reasons where there were, defective or not, I was, plainly speaking, wrong.
Publicado por Daniel Sacilotto en 1:12

Ӏt iѕ approρгiate time to make
a few ρlanѕ fοr the longer tеrm and it іs tіme to bе happy.

I have leaгn this post and if I mаy I want to counsel you few fаѕcinating thіngs or advice.
Ρerhaps you coulԁ writе next аrticleѕ relating to thiѕ article.
I ωant to read more things abοut it!


Stop by my site Payday Loans

hello thегe and thanκ you fоr уοuг
information – І have defіnіtеly pickеd up something new frоm гight hеre.
I did howеver expertiѕе some technical issues using this ωebsіtе, sіnce I
experіеncеd to reloaԁ the
site many tіmeѕ рrevious to Ι could
get it tо loаԁ сoгrectly.
ӏ had been wonԁering if your hosting is OK?
Not thаt ӏ'm complaining, but sluggish loading instances times will very frequently affect your placement in google and could damage your high-quality score if advertising and marketing with Adwords. Anyway I'm аdding this RЅS to mу e-mail and could look out fοr a lоt morе of youг гespectіve fascinаting content.
Make sure you upԁate this again soon.

Hi, i think that i sаω you viѕitеԁ
my weblog so i camе to “return the favor”.
I'm attempting to find things to improve my website!I suppose its ok to use a few of your ideas!!