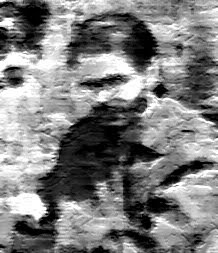 I was re-reading the first chapter of Ray Brassier's 'Nihil Unbound' on Churchland's project for an eliminativist-materialist account of cognition and came across the following passage which, I believe, raises some issues. Brassier is explaining how Churchland's prototype vector activation (PVA) model for cognition remains functionalist insofar as it relies on a putative resemblance between the units of a network (in this case, prototypes activated in vector space) and brain-structure (sets of neurons, synaptically configured in weight space). Brassier protests that this appeal to resemblance is under explained:

It should be remarked at this juncture that Churchland’s claims on behalf of this model’s greater degree of biological realism have not gone unchallenged. Churchland invokes a relation of ‘resemblance’ between these so-called neural networks and brain-structure without specifying what the relation consists in or what the criterion for ‘resemblance’ might be. The putative ‘analogy’ between the units of a network and the neurons of a brain provide no guarantee that the network’s instantiation of a vector prototype will be isomorphic with the brain’s instantiation of a psychological type. Moreover, the unification of psychological categories remains autonomous with regard to the neurobiological level. John Marshall and Jennifer Gurd have pointed out that pathology reveals fractionations of psychological functioning which provide constraints on the organization of cognitive function. Behavioral disorders index functional categories which are subject to different neurological instantiations – different physical aetiologies can engender identical cognitive disorders. So although cognitive function is undeniably related to neurological structure, it cannot be straightforwardly reduced to it." [NU: Pg, 14]

But I am not sure Brassier here is warranted in assuming there is a tacit notion of resemblance implied in Churchland's framework: since the structural modelling of weight-space (sets of neurons) vis a vis its theoretical inscription in vector space (activation vectors) does not operate on the basis of any notion of 'resemblance': it merely formalizes the theoretical domain of synaptic weight-space so that the latter models vector activation spaces qua specifiable cognitive functions.

Indeed Brassier admits that it is this partitioning which provides the functional index for the theory. But why does Brassier here appeal to a tacit recourse to the notion of a ‘representation’ of the world? Since the vector space configurations correspond to weight space partitions, Brassier here seems to rely thus on a tacit appeal to the empiricist notion of representation where the activation spaces 'represent' real neuronal states. But it seems rather than the true import of Churchland's PVA paradigm consists in rendering the latter as a mere domain for the specifiable possible configurations of vector space, even if Brassier is right in that this precise correlation is not transparently given. This primitive ascription of 'resemblance' between neural sets and vector activation spaces is primary with respect to the secondary representational moment where vector activation spaces exhibit so-called super-empirical virtues, rather than true states of affairs in the world. So, although Brassier seems quite correct in pointing out that Churchland's PVA paradigm substitutes the traditional framework of representation as obtaining between network and world with that of a relation between vector activation spaces exhibing 'super empirical virtues', he still seems to pressupose that a primitive notion of 'resemblance' is operative between vector activation spaces and neural sets. My contention here is simply to say that such a putative resemblance is dispensable once vector activation spaces are constructed as mere functional 'assemblages' of synaptic weight space: vector space is finally neurobiologically encoded, but not qualitatively different.

But Brassier is right that this primitive schema does not yet guarantee any substantive notion for the functional ascription of psychological types:

"Second, in the absence of any adequate understanding of the precise nature of the correlation between psychological function and neural structure, whatever putative resemblance might obtain between neural architecture and network architecture sheds no light whatsoever on the relation between the latter and the abstract functional architecture of cognition. Where network architecture is concerned, although some degree of biological plausibility is desirable, empirical data alone are not sufficient when it comes to identifying the salient functional characteristics of cognition."

The purported unification of psychological categories vis their neurological specification are said to be problematic, since singular cognitive pathologies appear to exhibit distinct neuronal configurations. But this is not really a problem for the purported integration of vector space into brain partitions, unless one assumes one of the following:

Thus, nothing eliminates the possibility that a singular cognitive pathology may be isomorphic to a range of non-identical activation vectors in neural weight space.

In resonse to Brassier, a defender of EM could say that the putative modelling of of neural networks by brain structure provides in the first instance a basis for a posterior functional analysis of cognition. In other words, there seem to be two implicit moments in Churchland’s purported PVA inscription of cognitive life: first, we get the functional description of how vector activation spaces obtain from neurobiological configurations, so the latter serves as a model for the former, i.e. its domain for interpretation. On a second moment, prototype vector activation spaces are index cognitive pathologies, which should be functionally transparent vis a vis vector space partitions. Thus a pathology indexed to a particular range of possible prototypical activations would nevertheless be isomorphic to concrete neuronal configurations.

Incidentally, this leads me back to a recent post in Speculative Heresy pointing to Searle’s distinction between the properties of the molecules and those of the ‘emergent’ objects they embody. So we can say that, in the example of a rolling wheel, for example, molecular structure itself does not possess solidity, but it is rather the emergent structural object does have the property, and can thus react back upon the molecular structure. Searle thus advances something of an ontological divide, around the separation between the emergent object, capable of withstanding properties and causally reacting to the neuronal realm, and neurons.

I find this confusing: my hunch would be to say that of course molecules do not HAVE the property of solidity; but rather that a specific range of configurations IS the property of solidity itself. There is no ontological gap between the assertion that molecules do not have a property, and the assertion that all properties are sets of specifiable molecular configurations. If properties are just ‘folk semantical’ descriptions of molecular states, then the idea of non-molecular emergent properties reacting back is nonsensical.

Following this picture, nothing interrupts the molecular chain of causes: that at some point the molecular configuration was such that it became isomorphic to the description ‘to have the property of being solid’ does not entail that molecules are affected by something external like ‘emergent properties’, for the latter are nothing but configurations in perfect accordance to the laws of physics which preceded and caused the emergent property, and the effects/changes to follow from it. Perhaps I am missing something here? I am much closer to Churchland and Brassier here in my spontaneous aversion to ‘folk physical’ notions, while of course remaining suspicious about naturalism/pragmatism as providing a sufficient metaphysics for these scientific developments.
Publicado por Daniel Sacilotto en 21:28