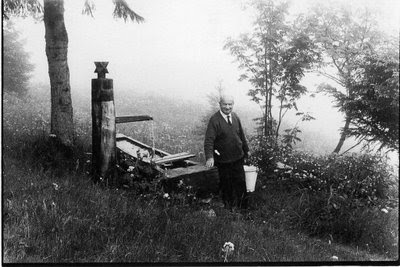 Heidegger’s critique of modern technology arises from the perspective of thinking the loss of a pre-modern ‘wisdom’ in which technological life (techné) was not yet conceived from the purview of instrumentality; it is only through the modern interpretation of technology as a mere means to an end that the bringing-forth (Hervorbringen) proper of technical life is put to the service of exploiting nature (physis) as standing-reserve [Bestand]. In this process, Heidegger tells us, nature is no longer conceived as something to be taken care of in order to benefit from it, like the farmer who works the land for the crop he uses; nature is deliberately challenged (Herausfordern) and set (Stellen) to obtain and amass energy from it; the gift of being in unconcealment (Unverborgenheit) is reduced by modern science to make the whole of nature subservient the whims of industry in production, to accumulation and consumption.

”And yet the revealing that holds sway throughout modern technology does not unfold into a bringing-forth in the sense of poiesis. The revealing that rules in modern technology is a challenging [Herausfordern], which puts nature to the unreasonable demand that it supply energy that can be extracted and stored as such. But does this not hold true for the old windmill as well? No. Its sails do indeed turn in the wind; they are left empty entirely to the wind’s blowing. But the windmill does no unlock energy from the air currents in order to store it.”

It is thus easy to see why for Heidegger the whole theme of Ereignis circles around the possibility of appropriating the proper metaphysical origins of the first beginning of thought and that this appropriation also requires a regression to a time before the advent of metaphysics in search for the old, lost wisdom. The properly Greek beginning signals this origin, where resonates the word of the poet for whom the world is not yet a stock in reserve. Through this appropriation of the past, Dasein becomes attuned as the caretaker of being and recognizes himself in bearing the gift of its truth (aletheia). That modern technology is quintessentially different for Heidegger than in pre-modern thought should not make us forget that this tragic outcome is also the ultimate consequence of the inaugural epoch of Western (Greek) metaphysics. Even if the transformation of nature into standing-reserve occurs only when Greek concepts are watered down by ’s misinterpretation and the subsequent assignment of technology to modern physics, this is well beside the point. The key resides in that even in the Greek beginning the essential forgetfulness took place, which of course for Heidegger is ultimately why a second beginning is necessary, and not just properly a return. The regression is thus meant to recover the wisdom that will allow us to move beyond the first beginning in the leap into being-historical thinking.

Against Heidegger's hermeneutic effort we should emphasize how what he perceives as the tragic outcome of modernity, triggered by the forgetfulness of being, already latently suggests there is pathetically nothing to remember. For isn’t it relatively easy to show, contra Heidegger, that in fact the fisherman who uses salt to preserve foods also deals with nature in order to be capable of stockpiling goods/energy? And isn’t it that the proverbial well from which the man from the mountains draws buckets of water serves effectively as a standing storage to be exploited and used? The thesis that suggests itself (developed among others by Bernard Stiegler in his extensive La technique et le temps) is that the attitude of Enframing (Ge-stell) and treating nature as standing-reserve is not just proper to modern thinking, but to all technical life as such, and that this attitude, far from being the mere result of forgetting the past, is actually the necessary form in which human existence (Dasein) develops. In this way, the transformation of nature into a reservoir of resources appears as the exemplary gesture of Dasein metaphysical existence.

The whole theme of a Greek re-appropriation can then appear but hopelessly short-sighted- the manipulation of nature and its instrumentalization (rendered in the very passage from Zuhandenheit to Vorhandenheit) obtains precisely from the forgetting of the gesture of the gift; of objectivizing and tearing apart nature from its organic totality in order to objectivize it; to dissect and preserve it as the means for some concrete human endeavour. The prospect of a leap into a second-beginning for the West, beyond the first metaphysical beginning, is thus rendered a provincialist/mystical illusion; man cannot escape his metaphysical dimension insofar as it challenges the world and nature to the concept- what Hegel called the ‘night of the World’). And doesn't the Beitrage’s call for a thinking which favors silence already tacitly suggest that the only way to sneak out of metaphysics is properly by an attitude of Gelsassenheit, apolitical apathy, inertia, or a simulation of the Eastern Buddhist theme of silencing and self-annihilation? Here we should recall Zizek’s reminder about the Hegelian movement of sublation, developed apropos of the recurring New-Age theme of recovering the wisdom of the ancient world:

“Here we have the properly Hegelian matrix of development: the Fall is already in itself its own self-sublation; the would is already in itself its own healing so that the perception that we are dealing with the Fall is ultimately a misperception, an effect of our skewed perspective… The problem with the ‘Western mechanistic attitude’ is not that it forgot-repressed the ancient holistic Wisdom, but that it did not break with it thoroughly enough: it continued to perceive the new universe (of discursive stance) from the perspective of the old one, of the ‘ancient wisdom’; and of course, from this perspective the new universe cannot but appear as the catastrophic world which comes about ‘after the Fall’. We rise again from the ‘Fall not by undoing its effects but in recognizing in the Fall itself the longed-for liberation.” [Ticklish Subject, Pg. 70-71]

And isn’t the structure of this self-sublating logic perfectly applicable to Heidegger’s position? On a first moment, the ultimate outcome of the Western instrumental attitude in modern technology is rooted in a forgetfulness being, starting in ; what we must do is recover this wisdom and leap outside of our derailed epoch and its sombre outcome. The additional turn of the screw happens then when we acknowledge that the tragic outcome is not only guaranteed by the forgetfulness of the beginning, but only perceived as tragic as long as we don’t realize that the sought for appropriation of the origin coincides with its tragic result. What Heidegger thus fails to realize is that the mechanistic attitude of man is only perceived as a deterioration from the forgetting of being if we ourselves forget that already Greek thought (doubtless since the very origin of man) was made possible on the basis on such a forgetting; the moment we realize Enframing does not result from the loss of a past we can safely overcome, but that it is inscribed in the very form of the past itself, we realize the tragedy of modern technology coincides with the appropriation of its origin. Put bluntly: no deterioration ever happened since nothing was ever genuinely lost that could signal the possibility of leaping into a ‘second beginning’, modern technology, far from being a contingent outcome triggered by the loss of ancient wisdom, is actually its truth actualized.

We can also see this nostalgic venture as the repetition of the fundamental ideological gesture of 'claiming distance to the text', which Zizek reproaches to Heidegger apropos his Nazi engagement, since the latter was triggered by the metaphysical expectation that a political program could simultaneously be self-aware of its historico-ontological conditions. The usual Heideggerean retort that the conferal of dignity to National Socialism was a mistake grounded in not freeing itself from the transcendental approach radically enough; the properly Heideggerean lesson is on the contrary to assert the insurmountable gap between the ontological and the ontic, never reducing the former to a particular form of the latter. So ultimately when Zizek accuses Heidegger for assuming that a political programme could at the same time be self aware of its historico-ontological conditions he in fact denies that simply by missing to acknowledge this gap we arrive at National Socialism (or any political programme without 'inner greatness', like communism or liberal democracy); the gap is constitutive for any political programme as such. So, finally, Heidegger's ideological gesture of claiming Nazism had an 'inner greatness' excluded from the specific ontic configuration of racial biology, remains particular in that it still assigns authentic ontological dignity to an specific political vision, and not just by assuming this dignity is possible rather than making this gap constitutive.

In the same way, this gesture is repeated in Heidegger's critique of modern technology by appeal to the pre-modern non instrumental attitude towards Nature. The usual story goes that after the Kehre Heidegger had shifted the axis of his approach from the (still transcendental) project of a fundamental ontology to being-historical thinking, where the full consequences of the break with transcendental philosophy is finally achieved. But isn''t the leap into beyn-historical thinking, or a post-instrumental conception of technology precisely that which serves as the historical variant of approaching transcendental 'inner greatness', whose mystery is locked in the pre-modern past, in the long-forgotten Greek origins? So when Heidegger thinks that it is possible to overcome tmodern echnology's perverse instrumentalization of Nature by recourse to the hermeneutic leap outside metaphysics, does he not thereby remain locked in the aspiration of such a homology between the indeterminate ontological truth which forever separates being from beings (metaphysics) and a positive relation to Nature? It should come as no surprise, then, that this envisioned second beginning results in a strange quasi-Eastern apolitical stance of Gelassenheit, a listening attitude to being's call in the open. Against this view, we must resist the apolitical temptation and claim that this envisioned symmetry is itself already marred by the transcendental approach Heidegger seeks to overcome (this point was rendered similarly in Derrida's explosive indexing of Spirit as the un-deconstructed underlying concept lurking in Heidegger's thought). We should insist that on the other hand this gap between the ontological foundations and the dissection of Nature is precisely constitutive for our relationship to Nature as such; there is no possible homology between being and Nature since it is only in the subject's constitutive negation of Nature as an organic whole and its dissection that it appears as such.

It is for this reason that Alain Badiou demarcated Heidegger’s endeavour to submit technology at the centre of the philosophical problem as ultimately part of the same pomposity that New-Age mystics infused with provincialist nostalgia share. If man is irrevocably a technological being in that it always seeks to tear nature apart from its organic totality, if the subject is indeed nothing but the radical negativity of what Hegel called 'The Night of the World', then rather than to attempt an escape from metaphysics, we must fully assume our metaphysical dimension and run with it. So Badiou is able to conclude, mockingly, that if there are any regrets with respect to technology it is only that it is “still so rudimentary”.