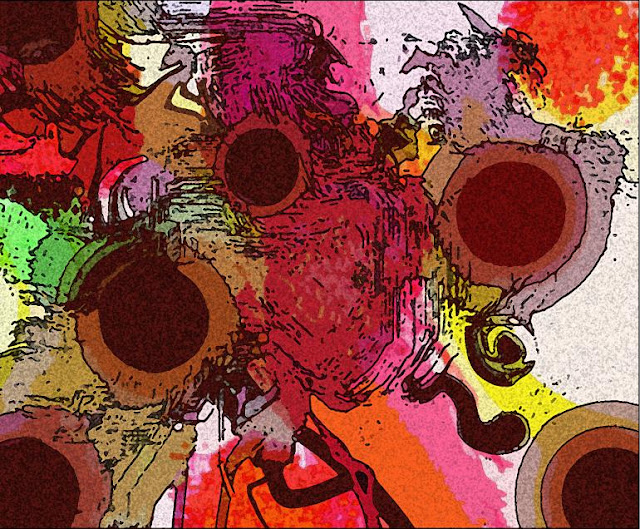 - ALIEN THEORY: CHAPTER III -
DELEUZE AND GUATTARI'S ABSOLUTE HYLETICS (PART II)
________________________________________________________
There are two terminological equivalential chains in D&G’s thought:
1) Zones of continuous variation – fuzzy sets of distributed nomadic elements: rhizome, plateau, Concept.
2) Surface of nomadic distribution – field for machinic consistency or plane of immanence; body without organs
These two depend on:
3) The distributing principle of ‘machinic synthesis’ - the syntactical operator which functions to determine the machinic heterogenesis assembling intensive multiplicities, that is to say, regulating the distribution of the fuzzy sets qua zones of continuous variation in the immanent field of nomadic distribution. The terms in this chain are: conjunctive synthesis, aparallel evolution, double becoming, abstract line, nomos.
Whereas the extensive manifold remains representational and quantifiable, intensive multiplicities are non-denumerable. These non-denumerable multiplicities index intensity and are: the unequal-in-itself’ or ‘The Disparate’. Becoming substantive as a rhizome, it a flattened multiplicity becomes autonomous and incommensurable to molar unity. It has n-1 dimensions and is in a state of perpetual heterogenesis in continuous variation through the work of the operator ‘and’ of conjunctive synthesis. So this ‘and’ functions as the distributing principle which propagates the flat multiplicity of n-1 dimensions which is in constant variation, i.e. is non denumerable: “What characterises the non-denumerable is neither the set nor its elements; rather, it is the connection, the ‘and’ produced between elements, between sets, and which belongs to neither, which eludes them or constitutes a line of flight” (Deleuze & Guattari, 1988, p.470). These are virtual continuums of intensive variation; whereas actual determinations (measure of extensity) are governed by the enumeration of punctual constants or tracing the relation among them. The rhizomatic abstract line of becoming conjoins variables of different nature or heterogeneous initiating constant variation, or the flux of ceaseless becoming. Let’s distinguish, grosso modo, the two systems of structuring in D&G’s thought
1) Structures of arborescence – Fixed identity and difference, sedentary, constant relations between variables and variable relations between constants, finite, extensional.
2) Rhizome – Continuous variation, infinite differences, heterogeneous variables, intensively differentiating.
“In this sense ‘and’ is less a conjunction than the atypical expression of all the possible conjunctions it places in continuous variation. The tensor therefore is not reducible either to a constant or a variable but assures the variation of the variable by subtracting in each instance the value of the constant (n-1)” (Ibid, Pg. 99)
This means that machinic conjunction entails a perpetually infinitely disjunctive process, in which the value of the constant across a series of elements is subtracted, triggering constant variation. This entails that the continuum of intensive variation forms a ‘rhizome line’ crossing two points and constitutes a block of becoming, which is nevertheless irreducible to the relations between those two points and their sedentary (extensive) configuration. As a result, this ‘deterritorializing’ function of machinic heterogenesis creates nomadic zones of intensive continuity rather than fixed zones of sedentary relations of identity and difference. The tensor ‘And’ initiates this perpetual nomadic transformation, in which a change of dimensions changes the nature of the multiplicity. This releases the machinic phylum of intensive matter comprised of pre-personal singularities, in perpetual flux. The ‘tensor’ is thus one of the names for the dynamic ‘materiality’ of the Earth or anorganic life, and shows how D&G ontologize matter by making it co-extensive with the philosophical Concept.
Here Brassier reinstates his case against the underlying materiology in D&G’s work: the enveloping of unobjectifiable immanence of the non-ontological separation between matter itself and matter as-such in the unobjectifiable transcendence of the ontological disjunction between intensivity and extensivity. This is made concrete in the reversible asymmetry between the phenomeno-logos of representational extensity and the materio-logos of machinic intensity on the plane of immanence through the tensor '(A)nd which sets in motion the flux of nomadic distribution, in constant self-sublation of its finite movements(not unlike the Hegelian plot). The Concept’s auto-construction assembles the chaos of intensive matter through the tensor’s perpetual heterogenesis or dyadic reversibility of plane/fold: thinking constructs the Real rather than represents it. Concepts are transient states of hyle-in-flux: chaoids or plateaus articulating lines of continuous variation. They are purely virtual events, ideal and yet not abstract, real and yet not actual, incorporeal and yet not immaterial (AT: Ph. 79).
But what, then, is the relation between plane of immanence and the philosophically posited Concept, and the interminable series of events that it constitutes in and as hyletic unfolding? The plane is not just the finite fold, the explication or moment of a representational fiction, but the Ideal Repetition of the One-plane: the absolute horizon for all events, which is inhabited without becoming thereby divisible or discontinuous. Concepts on the other hand are surfaces or volumes of finite movements at infinite speeds- the plane enfolds the manifold of Concepts making up a variable curvature as the singular ‘Rhizosphere’ of ‘pure variation’ or infinite machinic consistency. So the tensor ‘And’ must also be an index of the disjunctive synthesis of virtual intensity/ actual intensity over the plane of immanence, where the plane itself repeats itself in every fold: it is at once ‘a’ plane and ‘the plane’, a One-All. It is simultaneously the tensor of conjunctive synthesis of intensive becoming and the singular event in the continuous syntax of continuum/cut:
“The hyletic continuum of impersonal individuations and pre-individual singularities constitutes itself through the machinic syntax of continuum/cut (continuum/coupure) -disjunctive synthesis- by in-different/ciating an
immanence which is always already different/ciated; an immanence which is always a composite of virtual intensity and actual extensity; so that this infinite continuum repeats itself in every finite cut as the absolute differing of the Disparate or Unequal-in-itself.” ( Pg, 80)
The crucial observation provided by Brassier here concerns how the singular cut (finite fold; Rhizome) becomes a means for the repetition of the Ideal continuum (infinite plane; Rhizosphere). This marks the coincidence of the production of concrete becomings and the One-All event which generates itself in the perpetual heterogenesis, as self-objectivating causa sui; immanent-to-itself as Ideal form. We can sketch the series of associations set forth by Brassier and in D&G’s thought in the diagram below: